AS HONDA CELEBRATES 30 YEARS OF THE FIREBLADE, ANOTHER LEGEND TAKES THE STAGE: BABA-SAN IS BACK. 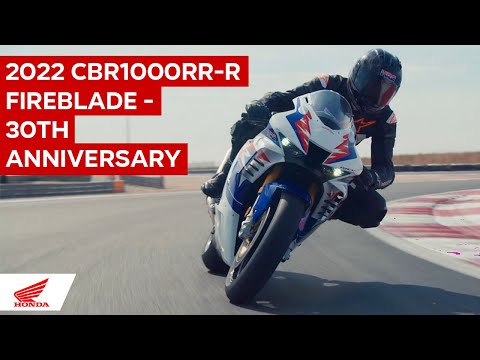 To celebrate the original, ground-breaking Fireblade and 30 years of continuous challenges since the introduction of that 1992 game-changer, a stunning Limited Edition 30th Anniversary version of the Fireblade SP will be available in 2022. Its tricolour paint scheme pays faithful homage to the original, with the ultra-modern feel of the 20YM stripe layout merged with ‘brushstroke’ style elements of the 1992 machine.

The Fireblade SP will also be available in two standard paint options, Grand Prix Red and Matte Pearl Morion Black, both now with gold wheels, while the Fireblade itself wears an updated Grand Prix Red paint scheme with prominent white number boards on the front fairing.

The changes are more than skin deep, with technical changes to the 160kW inline four-cylinder engine that focus on improving mid-corner acceleration and drive. The final drive sprocket also goes up 3 teeth, to 43, further boosting acceleration through each ratio. Honda Selectable Torque Control (HSTC) has been optimised for refined rear tyre traction management with input from HRC’s riders, and throttle feel even further refined.

Trustpilot
Back to Top
Company Info
55 Mendham Lane, Harleston, United Kingdom, IP20 9DW
Reg Office: P.F.K. Ling Ltd 55 Mendham Lane, Harleston, Norfolk, IP20 9DW
Reg. Company Number: 710435
VAT Reg. No. GB369231679
FINANCIAL DISCLOSURE: P.F.K. Ling Ltd is authorised and regulated by the Financial Conduct Authority. FRN: 307908. We are a Credit Broker not a Lender and can introduce you to a limited number of lenders. We typically receive a fixed commission calculated by reference to the vehicle model or amount you borrow, for introducing you to a lender but this does not affect the interest charged on the agreement, all of which are set by the lender. P.F.K. Ling Ltd is an Appointed Representative of AutoProtect (MBI) Limited which is authorised and regulated by the Financial Conduct Authority for Insurance Distribution. Their Firm Reference Number is 312143. Our FCA Permitted business is arranging general insurance and finance contracts. You can check this on the FCA Register by visiting the www.fca.org.uk.
Back
Vehicle Valuation
Compare Saved Vehicles
Top
Close