Mechanically unchanged for 23YM the CRF250R is still the strongest it’s ever been; in 22YM it got the MXGP championship-winning chassis of the CRF450R plus extensive cylinder head development for a considerable low-rpm torque boost. Cooling efficiency was also improved, while a strengthened gearbox got revised ratios and nine-plate clutch. A new graphic treatment marks out the 23YM machine and features a brand new redesign of the iconic HRC logos.

The MX2 class is relentless, close-quarter battle. And Honda’s CRF250R has proved itself a worthy weapon for the fight. Competition has led its evolution over time, through increments and steps, into a platform that the amateur MX enthusiast – as well as pro-racer – can extract the utmost out of, every metre of every lap.

For 18YM the CRF250R underwent a ground-up redesign that inherited the ‘Absolute Holeshot’ philosophy of the 17YM CRF450R, sharing its seventh-generation frame, revised geometry and Showa suspension. It was also armed with a brand-new DOHC engine and switchable engine mapping; rider-focused ergonomics ensured it remained an MX machine that the hobby rider could exploit to their individual level of ability.

Just one year on from this full model change the 19YM CRF250R received a boost to low-rpm torque, through extensive intake and exhaust development, plus HRC launch control, revised front brake caliper and adjustable-position Renthal Fatbars. In 20YM it moved forward once again, with the frame and swingarm of the 19YM CRF450R and more mid-range for the engine.

Now, for 22YM, the CRF250R receives major upgrades to make it ‘The Strongest Ever’ including chassis upgrades inherited from the 21YM CRF450R improving both ability and agility, plus stronger low-rpm torque to make best use of the new chassis, and improved toughness and durability.

The CRF250R is mechanically unchanged for 23YM apart from a crisp new graphic treatment which features the new redesigned iconic HRC logos, representing the expansion of HRC’s racing activities. 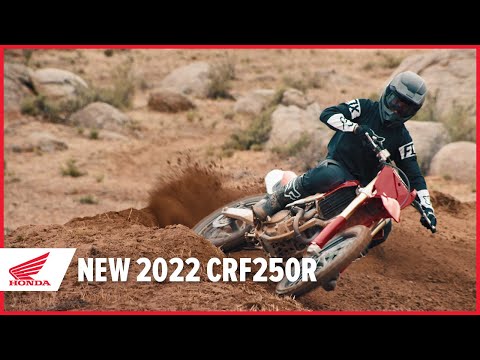 It’s worth recapping why 22YM was such a big advance for the CRF250R; to make going fast easier, the cumulative learnings of recent CRF450R developments have focused around reducing rider fatigue – which helps riders not only of world-class calibre but also MX enthusiasts of all ability levels to post constantly optimal lap times.

And what’s good for the 450 is even better for the 250. A full 3kg lighter than the 21YM design, the CRF250R’s frame and swingarm’s rigidity balance – combined with tighter chassis geometry and heightened ground clearance – target peak cornering performance and ease of handling. In support, the Showa suspension received brand-new valving, improving bump absorption, traction and control.

Engine performance was not forgotten either. Riders have always loved the CRF250R’s top-end power hit and to link up with the healthy mid-range, extensive revision to both intake and exhaust efficiency yielded much-improved low-rpm drive. Enhanced high-rpm cam timing accuracy was also a focus alongside long-term reliability, while a 9-plate clutch and strengthened gearbox (with optimised ratios) ensure none of the extra punch is wasted.