A major evolution for Honda’s AfricaTwin Adventure Sports: its sights are now set more firmly than ever on the far horizon, as a comfortable, long-haul, go-anywhere adventure machine. Engine capacity is increased, boosting power and torque, with EURO5 compliance, while weight is reduced by 5kg. A full colour 6.5-inch TFT touchscreen incorporates Apple CarPlay® and Bluetooth connectivity.

Your repayments will be less than traditional finance. You put down a deposit on a bike, and we calculate its Guaranteed Minimum Future Value (GMFV). We deduct this from the price of the bike and your monthly payments are based on what’s left. You can then choose to pay the GMFV and keep your Honda, return it or part-exchange it for a new bike.

PCP Terms and Conditions: Subject to model and colour availability. Offers applicable at participating dealers and are at the promoter's absolute discretion. Representative example based on 3 years 6.9% PCP. Excess mileage rate applies. Final payment includes £10 option to purchase fee. You do not have to pay the Final Payment if you return the bike at the end of the agreement and you have paid all other amounts due, the bike is in good condition and has been serviced in accordance with the Honda service book and the maximum annual mileage of 4,000 has not been exceeded. Excess mileage rate applies should this be exceeded. Indemnities may be required in certain circumstances. Finance is only available to persons aged 18 or over, subject to status. All figures are correct at time of publication but may be subject to change. Honda Franchise Dealers are credit brokers, not lenders. Credit provided by Honda Finance Europe Plc. Cain Road, Bracknell, Berkshire RG12 1HL.  Honda Financial Services is a trading name of Honda Finance Europe Plc. a company registered at Companies House No 03289418. Honda Finance Europe plc is authorised and regulated by the Financial Conduct Authority, Financial Services Register number 312541. 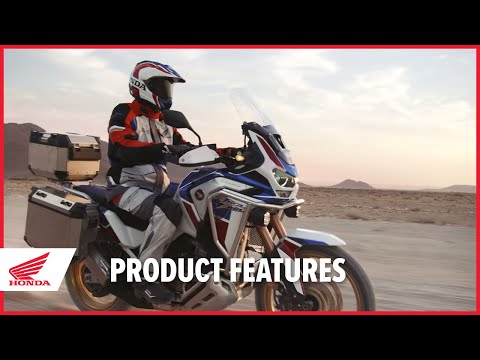 It’s been over three decades since the Honda XRV650 Africa Twin first rolled into Europe and while the motorcycle that now bears its name – launched in 2016 as the CRF1000L Africa Twin – was a brand-new motorcycle from the wheels up, it fully inherited the essence and spirit of what made the original so popular.

It was the balance between power and weight that was at the heart of the original bike’s appeal, just as it was for the new model. With its unique, athletic appearance, an enjoyable, usable engine and capable, comfortable chassis, the CRF1000L Africa Twin proved itself a true modern-day all-rounder and has been hugely popular with round-the-world adventurers, around-town commuters and weekend tourers alike.

Building on strong European (and global) demand for both models, with over 87,000 Africa Twins sold worldwide since its 2016 relaunch, 2020 is set to be a landmark year. The touring comfort, technology and all-round capability of the new CRF1100L Africa Twin Adventure Sports are significantly enhanced – with the added option of Showa Electronically Equipped Ride Adjustment (Showa EERA™).

Both models also pack more power and torque into a lighter overall package – in keeping with the first principles set out all those years ago.

** Please note that the figures provided are results obtained by Honda under standardised testing conditions prescribed by WMTC. Tests are conducted on a rolling road using a standard version of the vehicle with only one rider and no additional optional equipment. Actual fuel consumption may vary depending on how you ride, how you maintain your vehicle, weather, road conditions, tire pressure, installation of accessories, cargo, rider and passenger weight, and other factors.